Sky Books
Sky Books Product Line
Welcome to the Sky Books Online Bookstore where you can buy books on cutting edge global mysteries such as time travel, the political manipulation surrounding it and other ancillary subjects directed at healing the earth. For SPECIAL OFFERS featuring multiple products, good through August 31, 2021, scroll all the way to the bottom. To see Sky Books full assortment of products, click on SKY BOOKS PRODUCT LINE below in blue. 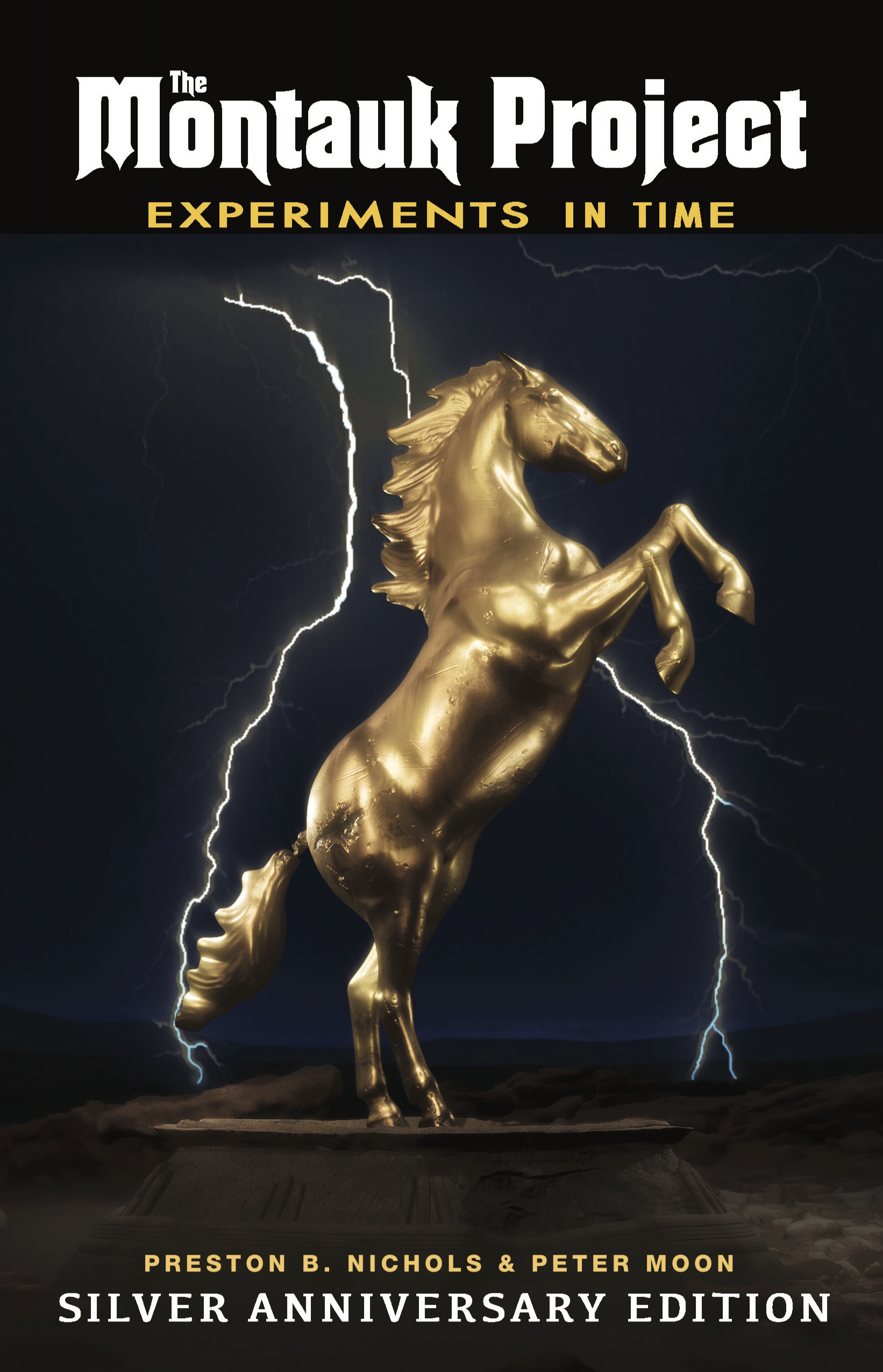 Montauk Project HARD COVER Silver Anniversary Edition
THIS LAMINATE HARD COVER EDITION OF THE SILVER ANNIVERSARY EDITION OF The Montauk Project: Experiments in Time is now in stock and available for a very short time at a discounted price. Originally released in 1992, "The Montauk Project" caused an uproar, shocking the scientific, academic, and journalistic communities, all of whom were very slow to catch on to the secret world that lurks beyond the superficial veneer of American civilization.

A colloquial name for secret experiments that took place at Montauk Points Camp Hero, the Montauk Project represented the apex of extensive research carried on after World War II; and, in particular, as a result of the phenomena encountered during the Philadelphia Experiment of 1943 when the United States Navy attempted to achieve radar invisibility.

The Montauk Project attempted to study why and how human beings, when exposed to high powered electromagnetic waves, suffered mental disorientation, physical dissolution or even death. A further ramification of this phenomena is that such electromagnetic waves rescrambled components of the material universe itself. According to reports, this research not only included successful attempts to manipulate matter and energy but also time itself.

In this Silver Anniversary Edition, you will not only read the original text, accompanied by commentary which includes details that could not be published at the original time of publication, but also an extensive summary of a twenty-five year investigation of the Montauk Project which culminated in the scientific proof of time travel capabilities. Read the book and discover the most exalted capabilities of Man. 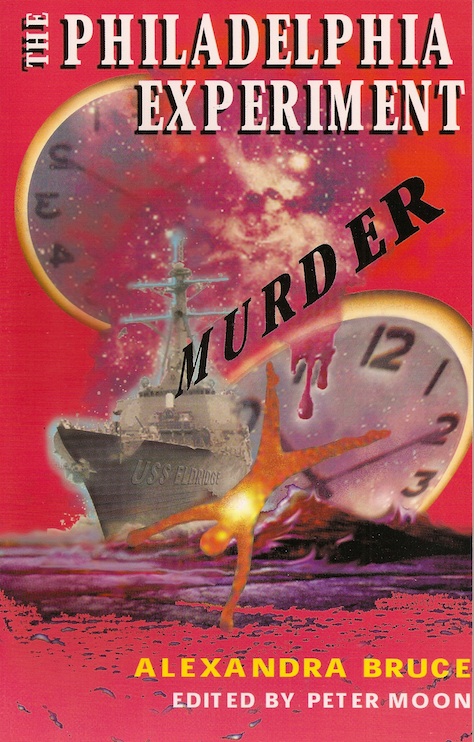 The Philadelphia Experiment Murder: Parallel Universes and the Physics of Insanity
by Alexandra Bruce 252 pages, ISBN 0-9631889-5-X, $22.00 An added edition to the intriguing series by Sky Books which exposes the truth about the conspiracy to manipulate time itself. This book, edited and contributed to by Peter Moon and authored by Alexandra Bruce, begins with the tragic murder of conspiracy lecturer Phil Schneider. An investigation of this murder exposes a massive cover-up by authorities and reveals astonishing information, the trail of which leads back to the Philadelphia Experiment of 1943. Before his assasination, Schneider lectureed across the country and released documents connecting his father to the U.S.S. Eldridge. Additionally, his father claimed to be a Nazi U-boat captain who, after being captured by the Allies, was recruited as a medical officer and served as a Senior Medical Officer to the crew of the Eldridge. More haunting was the discovery of gold bars in his fathers possessions with Nazi insignia. The Philadelphia Experiment Murder investigates these circumstances and uncovers a host of new characters including Preston Nichols actual boss from the Montauk Project. Startling truths are revealed which lead to an examination of parallel universes and the nature of insanity itself.
Price $22.00 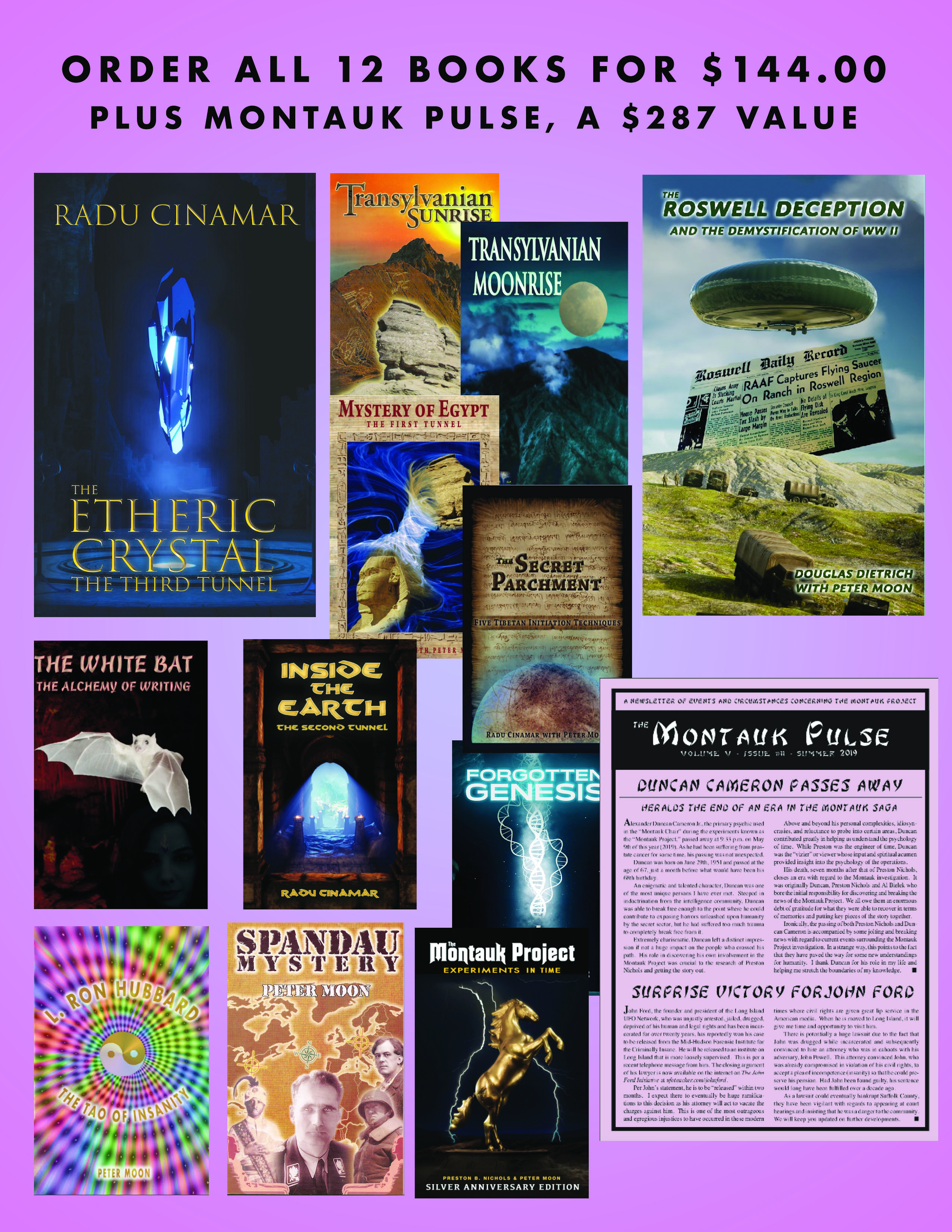 Special Offer Number 5
For a short time, you can order the ROSWELL DECEPTION plus the following eleven books and also receive a subscription to the MONTAUK PULSE for $154.00 plus shipping, discounted from a value of what would normally be $295.00 retail (A SAVINGS of $141). Offer good through July 4, 2021. Titles included are as follows: The Roswell Deception, Transylvania Sunrise, Transylvania Moonrise, Mystery of Egypt, The Secret Parchment, Inside the Earth, The White Bat, Forgotten Genesis, The Etheric Crystal, L. Ron Hubbard - The Tao of Insanity, , The Montauk Project: Silver Anniversary Edition, Spandau Mystery.
More Details+Reg. Price $287.00 $155.00 On Sale! 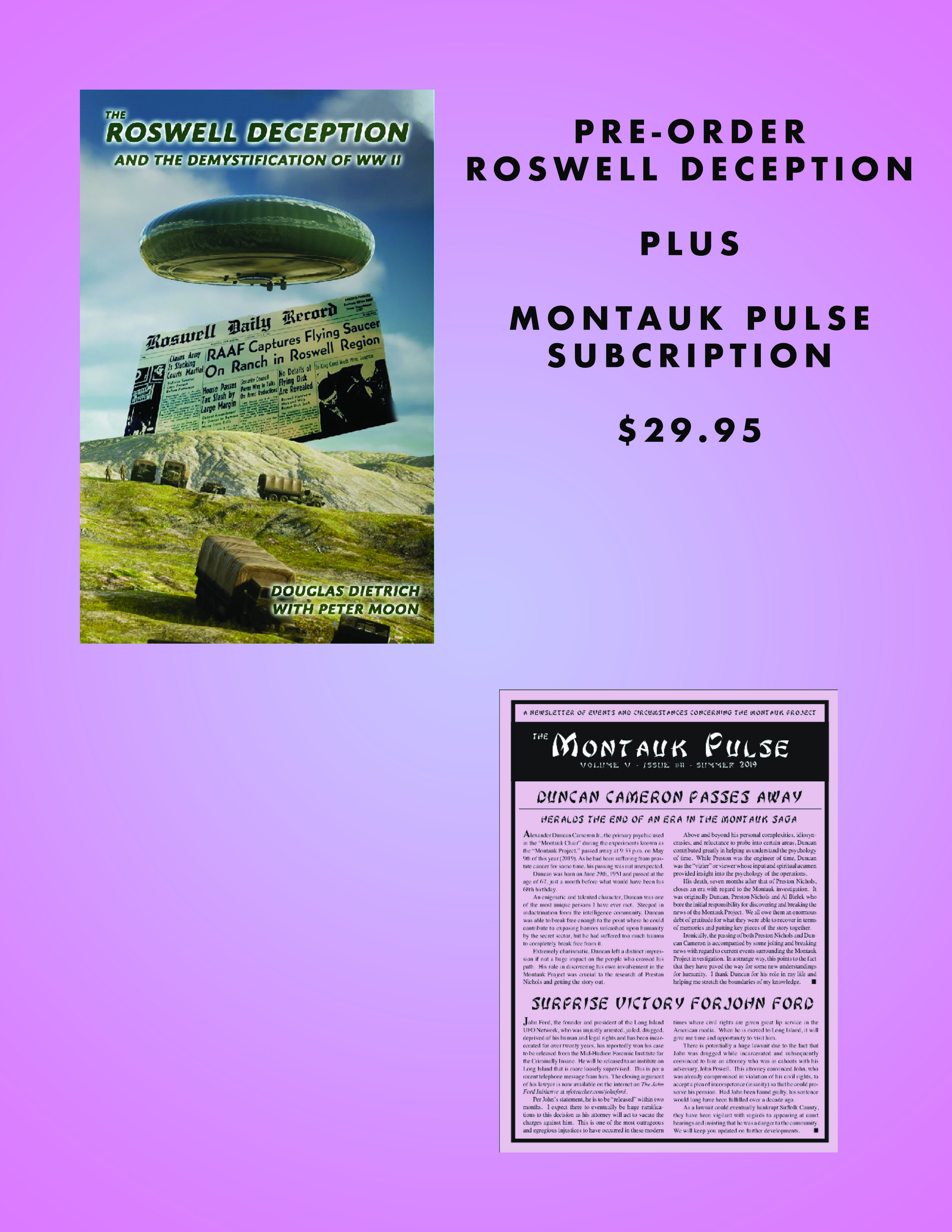 SPECIAL OFFER #2
In addition to receiving both new book, THE ROSWELL DECEPTION & THE DEMYSTIFICATION OF WORLD WAR TWO, you can also receive a discount on a subscription to THE MONTAUK PULSE for $29.95 total (inclusive of the new book). THE MONTAUK PULSE is a quarterly newsletter by Peter Moon giving updates on Montauk, events in Romania as well as the time travel research of Dr. David Anderson. It has been in print since 1993 and has never missed an issue. It helps support the work of Peter Moon and is a crucial publication. NOTE: THE BOOK ORDER FOR THE ROSWELL DECEPTION will be shipped upon arrival of the book, expected mid to late June.
More Details+Reg. Price $44.95 $29.95 On Sale!

SPECIAL OFFER #3
In addition to receiving both new books, THE ROSWELL DECEPTION & THE ETHERIC CRYSTAL, you can also receive a discount on a subscription to THE MONTAUK PULSE for $44.95 total (inclusive of the two new books, a $66 value for all three products).THE MONTAUK PULSE is a quarterly newsletter by Peter Moon giving updates on Montauk, events in Romania as well as the time travel research of Dr. David Anderson. It has been in print since 1993 and has never missed an issue. It helps support the work of Peter Moon and is a crucial publication. NOTE: ANY BOOK ORDER INCLUDING THE ROSWELL DECEPTION & THE ETHERIC CRYSTAL will be shipped upon arrival of both books, expected mid to late June.
More Details+Reg. Price $66.00 $44.95 On Sale! 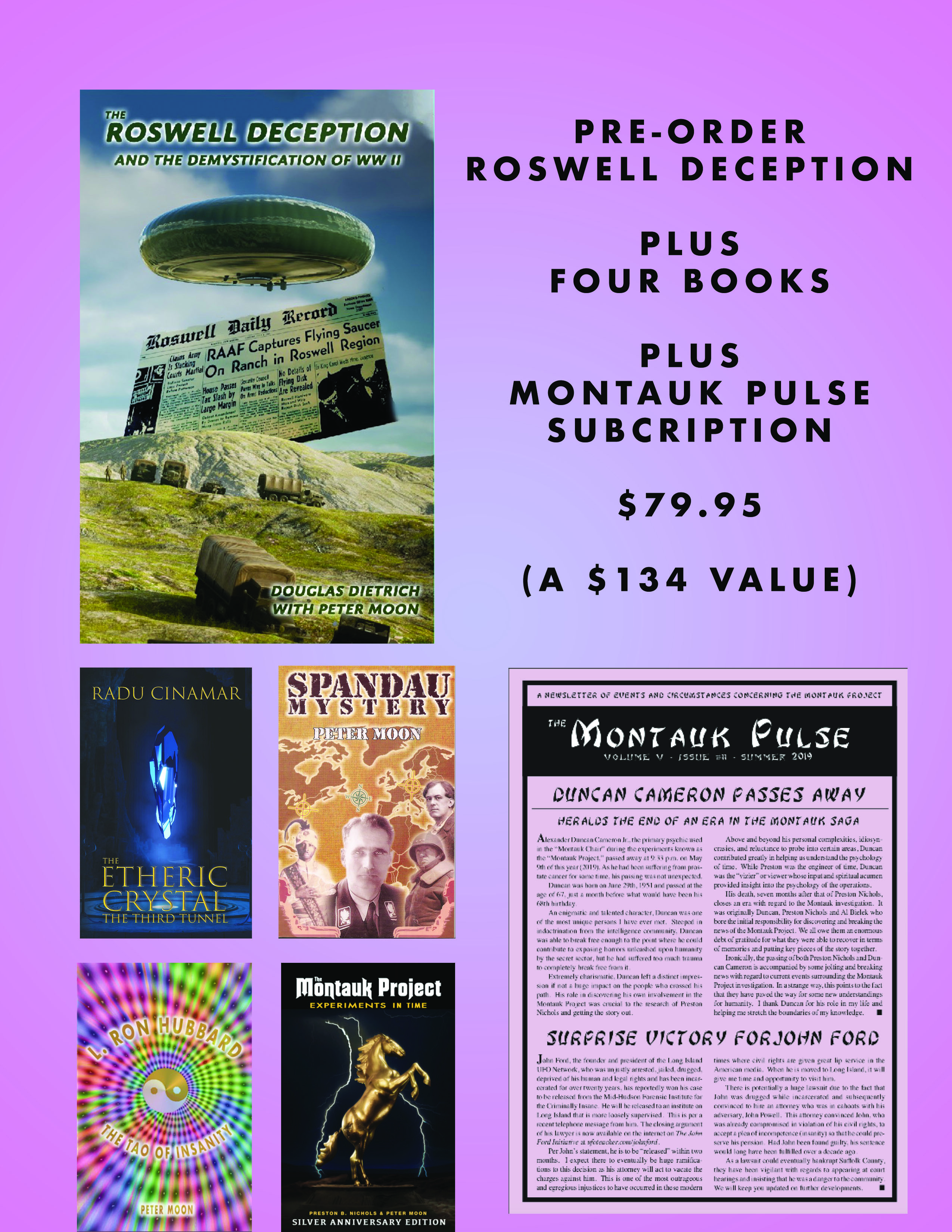 SPECIAL OFFER #4
For a limited time (through July 4th, 2021) you can receive a discount of over $64 by ordering THE ROSWELL DECEPTION PLUS THE FOUR FOLLOWING BOOKS: The Etheric Crystal by Radu Cinamar, Spandau Mystery by Peter Moon, L. Ron Hubbard - The Tao of Insanity by Peter Moon, and The Montauk Project: Silver Anniversary Edition. ORDER TO BE SHIPPED IN MID TO LATE JUNE. THIS IS A PRE-PUBLICATION ORDER.
More Details+Reg. Price $134.00 $79.95 On Sale!
View Products By Detail ListView Products By Image